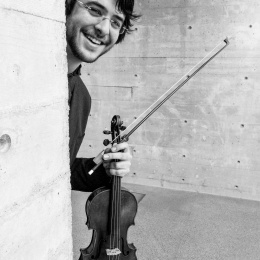 Pablo Hernán Benedí was born in Madrid, Spain. He studied at the Padre Antonio Soler Conservatory in San Lorenzo de El Escorial with Fernando Rius and Polina Kotliarskaya before coming to London in 2009 to study at the Guildhall School of Music and Drama with David Takeno, supported by scholarships from the Martin Musical Scholarship Fund, Juventudes Musicales, and La Caixa. As well as being a member of the Chiaroscuro Quartet, Pablo is a founding member of the Trio Isimsiz, which has performed in venues such as Wigmore Hall, Aldeburgh Festival, Barbican Hall and Royal Festival Hall. In 2015, they won the first prize and the audience prize at the Trondheim International chamber music competition. As a soloist, Pablo has performed with London Chamber Players, Padre Antonio Soler Symphony Orchestra, and London’s Philarmonia. He also regularly works as leader or section leader with groups such as Arcangelo, Sinfonia Cumry, and Academy of Ancient Music. He has also appeared in festivals such as Mecklenburg-Vorpommern and Lockenhaus.